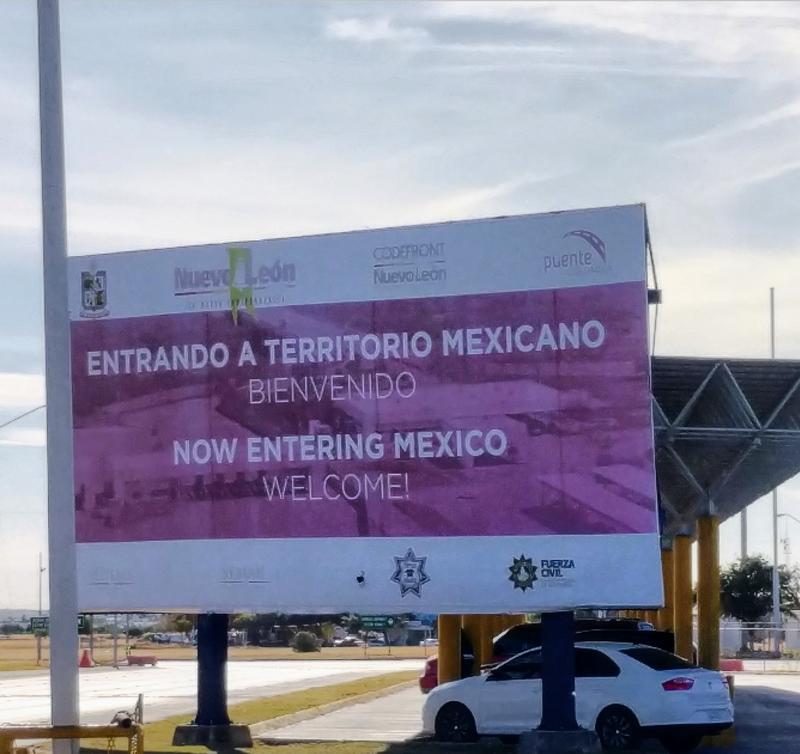 We had a stressful border crossing on Monday, by which I mean, we had a relatively easy time moving from one nation to another, thanks to our US-passport-privilege. 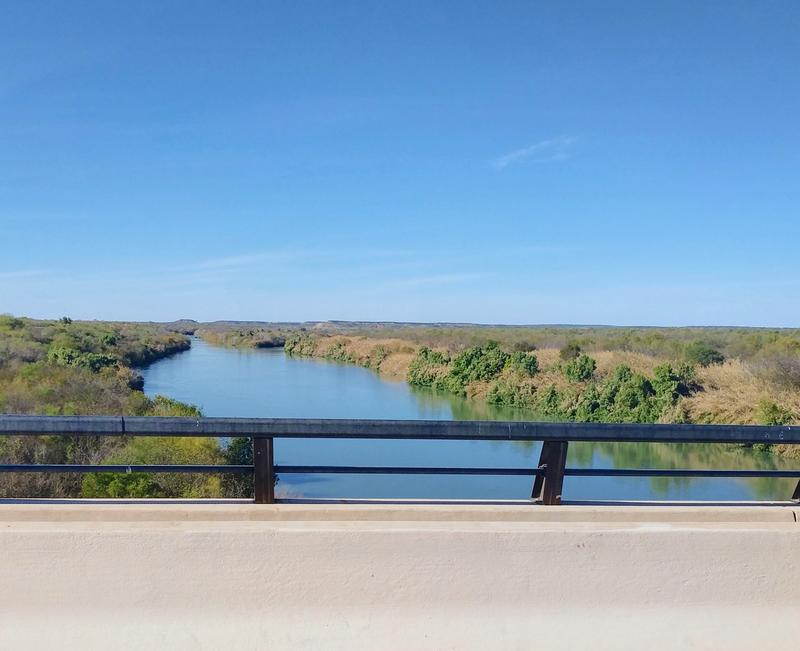 This river looks so innocuous. Tell me, did you even recognize it? How would you know it’s the border between two countries? Looks a lot like the San Antonio River we strolled along with cousin Yvonne last week. 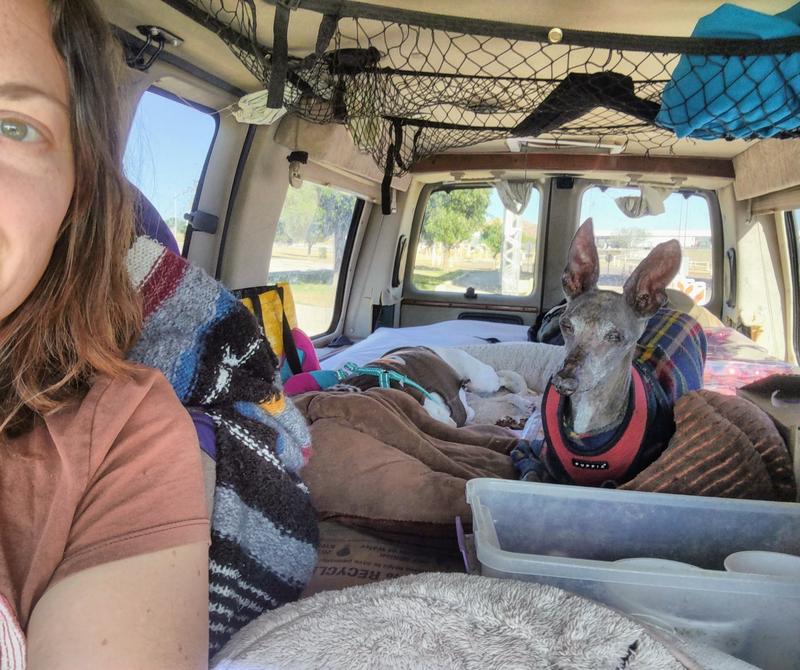 We spent a relaxed morning packing the van full of gifts/errands for friends and family (even our wonderful vet, Alfredo) and Phillip drove us safely to the border. We knew we had enough Bell’s (and other can’t-find-in-Mexico-beer) that we might have to pay a fee, and we really hoped they wouldn’t check our cooler and see the illegal comfrey and rhubarb roots we’re smuggling in to plant in El Terreno.

The first problem was our vehicle import paperwork wasn’t in order. Now, Phillip had carefully researched all this stuff before we left the first time, and he was confident we had done it all right. Well, depending on how you read the fine print, we had either done it right or wrong. So they let us sort of re-do something, which means we lost a deposit, but didn’t have any other problems.

Presumably because we had this discrepancy, we got more scrutiny than ever before. Someone looked over the vet’s paperwork for our dogs (while Dr. Alfredo had done perfectly, so we were fine). Might have even helped that the dogs are so cute and friendly.

They x-rayed the van a couple times, and opened some of our boxes and tubs, even ripping a piece of one of our friend’s boxes (which we’re delivering). Not too surprising; a person could’ve curled up in each of his boxes. But of course they just saw clothes and I explained these are gifts, along with some kitchen items, and they nodded.

They asked Phillip to pull out the baseboard heaters we’re bringing to the vet, opened a package containing pants for Edith, saw some of the 6-packs of beer under the bed (look we’re only taking 6 6-packs, but it’s over the free limit of 1 liter per person of alcohol), and waved us through. 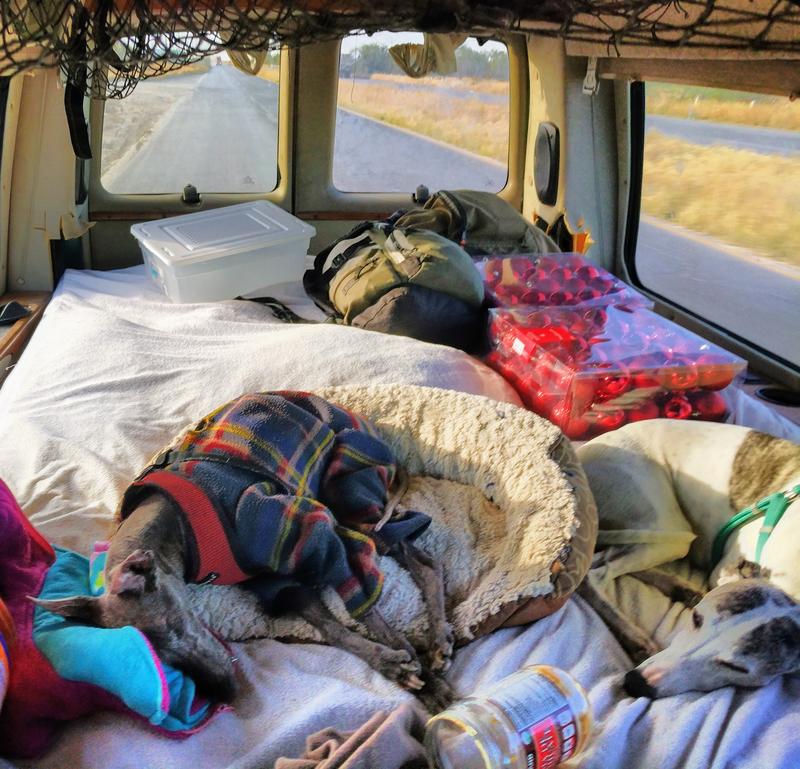 Relaxed, the dogs went back to sleep. (They had felt our stress and didn’t relieve themselves while we waited on the x-rays.)

We happily drove away, glad we could deliver so much harmless booty (we’re not selling anything for profit; all legitimate gifts and deliveries).

Ten minutes later we got pulled over by an intense cop in a pick-up. He was adament that we’d been speeding, but after we had just been complaining about the rough highway, we knew that wasn’t true.

It sounded like he was telling Phillip to get out of the car to go see a video, but actually he wanted Phillip to go stand by the police truck so their conversation would be on video. (Our Spanish is even worse after a month in the US!)

He said the fine was $3000 (US$150) and that Phillip could fill out a form and give him the money and his license, and we could pick up his license when we leave the country in a few months. Not happening. So our other choice was to follow him to “the station,” which was…well…we didn’t know. We were out in the middle of nowhere!

I had this feeling–something is going to happen and this minor offense (probably made-up or at least mis-attributed to us, rather than one of the vehicles which had been passing us) will become unimportant. But I didn’t wish trouble on someone else. So after following the police truck for 10 minutes, I wasn’t surprised to see them pull off on a shoulder. But I was a bit dismayed when the cop came jogging back, handed Phillip his license, and said, “there was a crash, drive carefully, sir.” And they sped away with lights flashing, as another police truck sped down the same highway. Selfishly relieved, but sad for someone(s) else.

We made it through the borderlands checkpoint smoothly (unlike our first trip across).

Borders, airport security, getting pulled over–these security circumstances always stress me out, even though I never have weapons or illegal drugs. But these are circumstances defined by power which is enforced through violence and intimidation. And what we’ve found in Mexico is that while people are usually nice (or at least benign), we end up missing some small detail and losing money.

Still, I know we have an easier time navigating security and borders than 99% of the world, with white skin and US passports. During this (most recent) peak of US-American anxiety and xenophobia about people crossing the border, I’m glad we can smile through our lousy Spanish and demonstrate that we are interested in Mexico, that we are glad to be with Mexicans, that we find life as valid, valuable and holy on this side of the border.

Thanks for writing that all out, and for your astute reflections.

As I read this post, my heartbeat and respiration increased, feeling fearful on your behalf. And like you, I squirm at the thought of how VERY MUCH more stressful and scary border crossings are for those who don’t have our White, moneyed, privilege. I’ve been reading Homegoing by Yaa Gyasi, which is full of reminders of how much injustice occurs with big power differentials.