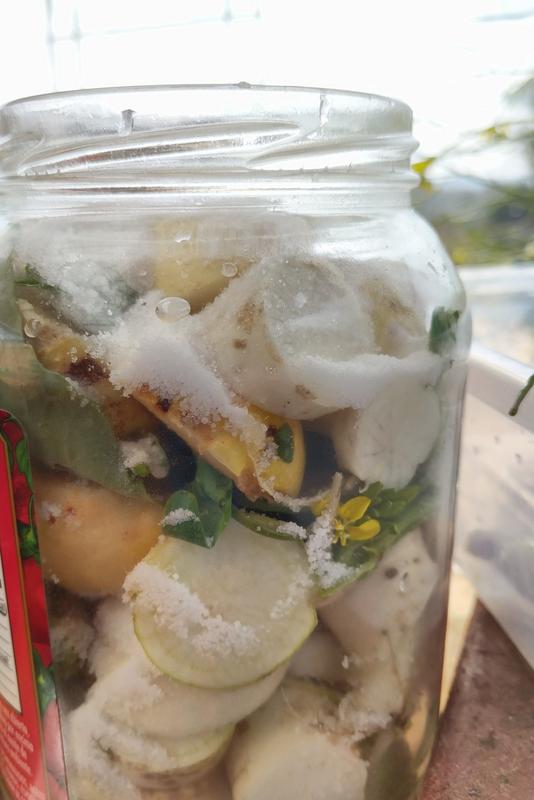 We planted a bunch of daikon radishes since they’re known as tillage radishes for growing long (up to 2 feet) and strong, tilling through compacted soil.

What they’ve done en El Terreno is self-harvest and break off underground.

We still have tons of them to eat, and I usually chop up bottoms and tops and put it all in soup. Another option (see below) is to put in food processor with beets and almonds - delicious! When we were ready to branch out, we made a couple batches of kimchi.

Fermenting foods is quite rare in Mexico. Drinks, sure, but not vegetables. Our jars are a conversation starter - and we helped our neighbors make pickled cucumbers, too! We put jicama, field mustard, dry chiles and maybe some other things in with the radishes.

Like most things, it’s harder to do in an outdoor kitchen with limited supplies and no standard plumbing. But the jars seem to have been clean enough because we don’t have anything suspicious growing in our kimchi! I also used way too much salt, so we’re adding plain water as we have room. Probably should have used 2 T per quart but used twice that much.

Guess what else we’re doing with salt?

I hope i get to eat some kimchi next month!

Definitely! It’s way too salty though, I’m adding water to the jars when I have space, but still…whew! So we’re putting a little with salad greens or just bearing it:-)