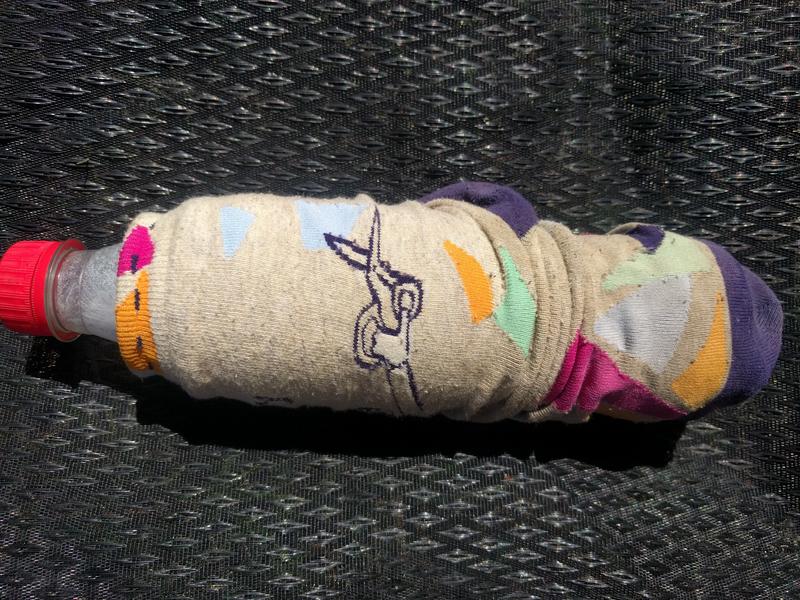 We have a water heater and solar showers. They are all heated directly from the sun. They’re wonderful on clear days, but they don’t get warm on cloudy, rainy days. This post is about our first experiments with storing heat from the sun to use when it isn’t shining. We’re learning to heat with salt. Had never occurred to me, but it works offgrid to keep our toes from becoming ice cubes overnight.

It’s not just us

In Germany 83% of household energy is for space heating and hot water. All of their lights, appliances, computers, tv’s, x-boxes, use only 17% of the household energy. If they want to be 100% fossil-fuel free on a cold, cloudy month what’s the best way to store all of that energy?

In places where it snows Calcium Chloride (CaCl2) is sold in all the big box stores for melting ice off of sidewalks and driveways. It costs about $20 for a 50 pound bag. It’s relatively safe. Most importantly Calcium Chloride dissolved into water creates an exothermic reaction (hot water). The salt can be recovered by heating and evaporating the water. It can be “recharged” an almost unlimited number of times. 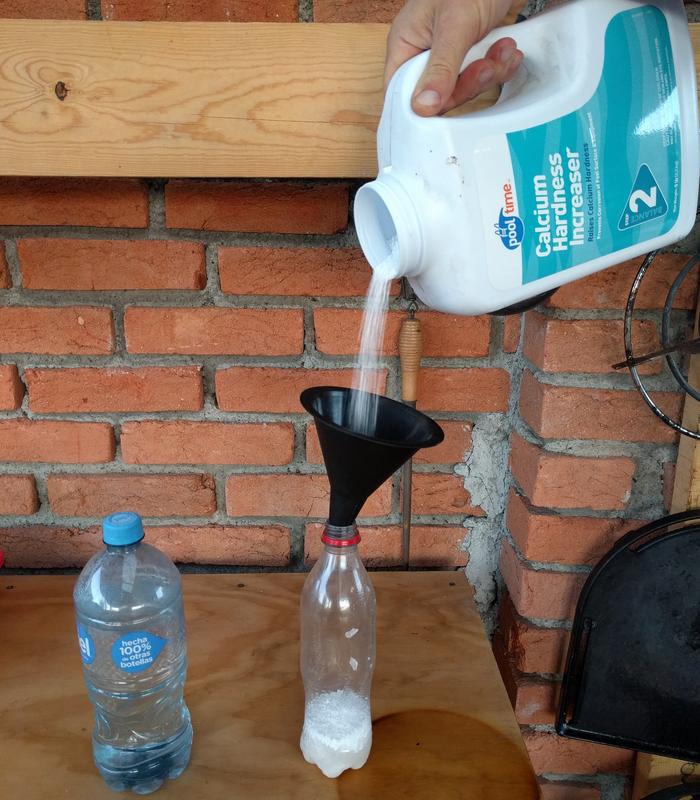 We’ve been making foot warmers with an empty water bottle, dry Calcium Chloride, water, and a sock. Here is the process:

The next day we tested a quick recharge. We poured the mixture into a pot and brought it to a boil on the propane grill.

As the water boiled off a skin of salt formed on the surface. After all the water was boiled away we scraped the salt out of the pot with a spoon and put it back into the water bottle to be used again. 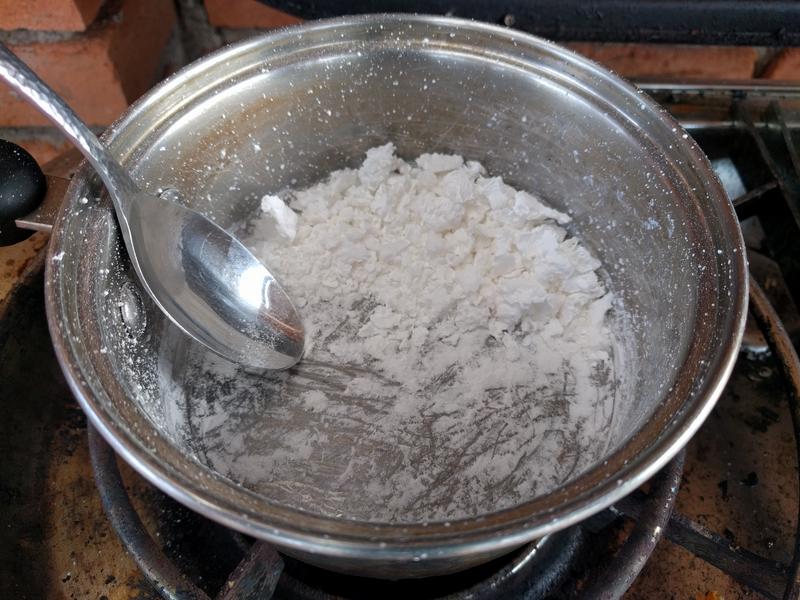 There was some salt residue left on the pot. We can’t leave a dirty cooking pot! Luckily the salt easily rinsed off with water. 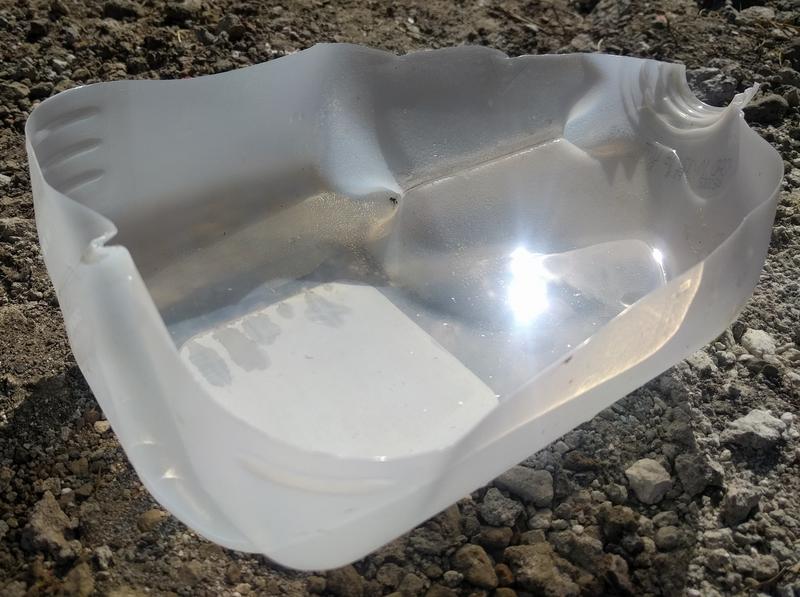 Next we attempted to recharge the salt by placing the solution in a shallow tray made from a milk jug in the sun. After two clear, sunny days it looked basically the same. Little-to-no water evaporated. We poured the solution from the tray into a water bottle and added a little fresh water. The bottle warmed a little, but not nearly as much as with the Calcium Chloride powder. After some research we found that the solution has a boiling point of 244 F. Perhaps using a black tray or adding charcoal dust to the solution would allow more solar energy to be absorbed and increase the rate of evaporation. While more complex, a concentrating solar collecter made with relatively simple materials like mirrors and iron pipes can reach temperatures of over 400 F.

Why is this better than storing hot water in an insulated tank?

Our sleeping bag holds hot water for about four hours. A good, home-built insulated tank might store useable heat for a week. The dry “charged” Calcium Chloride can be stored almost indefinitely. This lets us store the sun’s heat on a hot, sunny summer day, then use it six months later on a cold, cloudy winter day.

Why is this better than heating with wood?

There is no fire. The bottle gets warm, but not hot enough to start a fire. It doesn’t consume oxygen or release smoke. This is much safer to use in a small, enclosed area like a van!

Since there is no smoke, widespread use of this technology would reduce the suffering and deaths of millions of people from respiratory disease. The Global Burden of Disease study estimates that 3.5 million people die annually from respiratory illness due to burning wood and other biomass.

In the real world, plants convert less than one percent of the available solar energy. A solar thermal collector on the roof of a house might be able to collect as much solar energy as an acre of forest. (So skip cutting down the acre of forest!)

Why is this better than solar photovoltaic panels?

Photovoltaic panels convert sunlight into electricity. To use the energy on cloudy days, it has to be stored somehow. The energy could be stored in batteries, but they are much more expensive and wear out much faster than the Calcium Chloride. Photovoltaic panels could be used to recharge the Calcium Chloride when there is excess supply. However, concentrating solar collectors are two to three times more efficient for collecting thermal energy, and likely can be made much cheaper. It makes sense to use concentrating solar collectors for the 83% of household energy needed for space heating and hot water, and photovoltaic panels for powering electric appliances.

Try this at home

If you’re snowed in and have a bag of Calcium Chloride ice melt in the garage, try it out. Keep it out of your eyes, nose, and mouth, kids!

We’ll continue looking for a simple way to dry the salt with solar energy. Chemists, solar engineers, and tinkerers share your thoughts and experiments in the comments below.

Guess what else we’re doing with salt?

Very interesting, and food for thought.

I don’t quite understand all the science, but i sure like the idea of the toe-warmers! I certainly do not like the idea that us heating and cooking with wood means we’re killing 3.5 million people/year :-(.

Rachel, What makes the wood smoke numbers so high is the 3 billion people cooking over open fires They get the equivalent health implications of smoking three packs of cigarettes a day. I know you’re well aware of the advantages of improved cook stoves and solar cookers from your time in India.