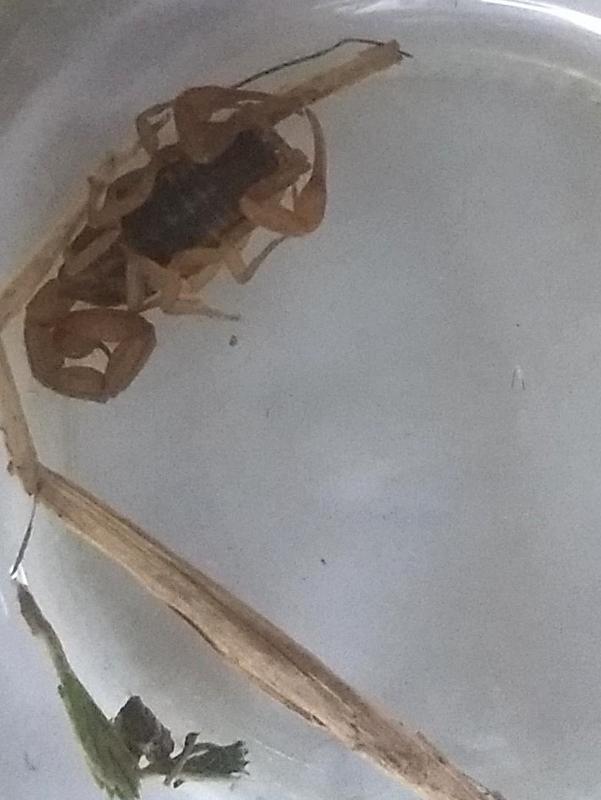 Here’s what I learned from my first scorpion sting: pre-emptive strikes have a place, even for this pacifist.

I was tidying up a pile of scrap wood because I was worried that one of our dogs would get stung - they like to sniff around this tempting scorpion habitat. I put all the wood in a couple buckets; as I was moving the second bucket back against the wall l that I felt fire.

I hoped it was a bee, but this pain was just too strong. Then we found it.

Phillip had seen and stomped on one that morning. They come out in the heat.

We decided to treat my symptoms with acetaminophen and antihistamine rather than going somewhere for an antivenom. Partly because we’ve heard that some people react to the antivenom and can’t take it a second time. Partly because it just seemed overwhelming to deal with the ordeal of packing up the place enough to leave, finding a clinic, navigating language. We almost asked the neighbors for a pill since they had a sting recently and told us they had antivenom if we need it. But still seemed like I could just wait and see if my reaction became dangerous. (And turns out the main medicine used here, avapena, is just a strong antihistamine. We have some on-hand now, esp for our dogs and cats who would not survive a sting.)

I couldn’t sleep through the pain. My vision was affected that night for a couple hours. Literally from my head to my toes I felt pins and needles, stronger on the left side of my body. I’m glad it stung my left hand since I couldn’t use it for days.

Now I have a tiny tingle in that thumb.

Picadura is a sting or a bite. That’s why our neighbors occasionally say “scorpion bite” in English. No need to distinguish between which end of a pest is causing such horrible pain. One word. Efficient. Our neighbors found three scorpions in their house the night before their sting. The drama added a layer to our friendship.

When I encountered a scorpion on a rock the other day, I pre-emptively killed it

I still don’t think my country should pre-emptively kill people just in case they might become terrorists or other ridiculous, counterproductive violence like that. But I am gaining empathy for people who choose violence to protect those they love. And I pray I only face these choices in the form of scorpions, mosquitos, mice and grubs.

I like your new blog site, makes it easier to go back and read posts that I missed. I think you guys are pretty brave for making a go of it in Mexico! I’m still nervous about my relatively short move to GA! Look into rabies vaccines for your kittens, to protect you guys and your pups.

Wow, what a terrible experience. Any lingering after effects?

Be careful there, Anna Lisa and Phillip! You’re living on the edge. Next time it could be a poisonous snake. I encourage you supply your first-aid kit with the appropriate and necessary antidotes.

Hey Anne! so good to hear from you - we send you lots of energy and patience as you settle into Atlanta. What a good place. And it’s lucky to have you! Sharon, I still have a tingle in that thumb but it’s not painful at all, doesn’t impact how I use my hand or anything. But I do wear gloves more often! Tom, good call - we are ready now, we think. Luckily no snakes so far. Please, may that stay true!