Gris is noisy, bold, demanding and social. I was shopping for chickens when I saw four kittens in a tiny cage. The black one caught my eye, but this gray one was so bold and curious and I figured he’d become a good hunter. So they both came home with me.

And he is a great hunter, we think he’s catching something pretty much every day now. He practices on his family.

And he’s caught mice, rats, lizards and even a scorpion! 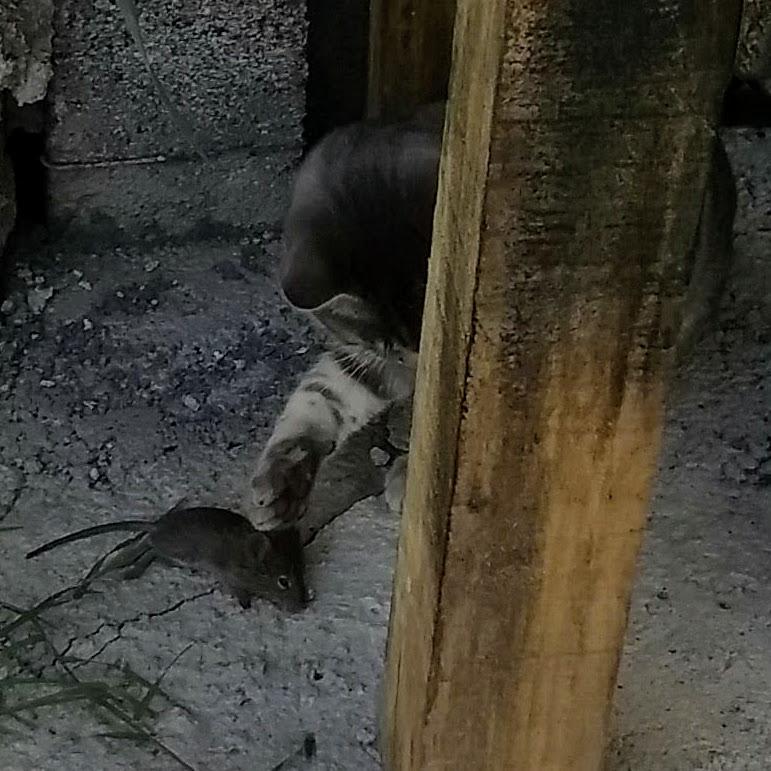 Then, naturally, he naps.

If we’re in the kitchen he often naps there, probably because he likes to do what Booker does.

But they don’t cuddle! Phillip is trying.

He got his name because we’d been calling him “gray cat” since he hadn’t revealed his name to us yet. Then he was at his first vet appointment and they needed to start his records, so we declared him “Gris.” (Spanish for gray.) It suits him. Plus I love the wordplay. Gris/-fire-Fly. Get it? We have Fly and Gris[grease], and fire is their bridge.

Often the cats disappear in the afternoon for naps in their cabana loft. But if we’re in the kitchen he usually comes out; he’s just gregarious! So we get to enjoy his napping.

Gris became famous for infesting our life with tapeworms. Luckily, they’re easily and quickly treated (once you figure out what the little rice grains are.)

The worst thing that ever happened to Gris was Fly disappearing for 11 days and getting attacked by feline invaders. His life is back on track and his attitude is “I’m a tiger!”

His coloring is just phenomenal!